For this meeting we will be reading a book that address what some refer to as the “God-sized hole” in the secular life.

Does it exist, this “hole”?

If so, what shape does it have?

Should we fill it with something? Or let it close over by itself, in time? 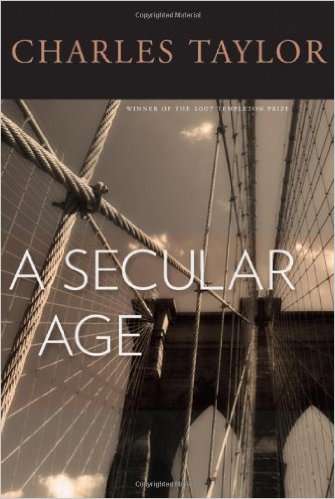 A SECULAR AGE by Charles Taylor (2007) traces the emergence of secularism as a viable way of life in the Western world during the span of 500 years from 1500 to 2000.

Taylor rejects what he calls modern “subtraction stories,” that is, those explanations for the rise of secularism that assume that, beginning with Galileo, science and reason merely had to push back against the forces of darkness and irrationality, shunting supernatural silliness to the side. In other words, he rejects the Enlightenment’s understanding of progress.

He argues, instead, that what happened was a more complicated process, in which our world gradually became “disenchanted”; in which the fixed, known cosmos became a vast, indifferent and even hostile “universe”; and, as it did, our sense of self became “buffered” and independent in a way it had never been before.

This process created a “nova effect,’ according to Taylor, generating multiple alternatives to supernaturalism. These alternatives proliferated — and continue to proliferate — to this day. We need only look to American history to find examples: from the Providential Deism of Washington and Jefferson… to the Transcendentalism of Emerson and Thoreau.. to the Scientology of Tom Cruise and John Travolta (how far we have fallen!)… all the way to the atheistic materialism of Daniel Dennett and Sam Harris…

It’s an astonishing book, full of detailed intellectual and social history, making careful analytical distinctions on every page, really in every paragraph. (I am about 300 pages in, and even where I strongly disagree with it I find it very compelling.)

As we get closer to our January meeting I will provide some (shorter) alternative readings.

The main point of this meeting will be to dig deeply into the non-supernatural meanings that guide our life and find any holes that might be lurking there. If we find one, let’s put our head in and take a look around.