We gathered as usual at 8 pm. In a burst of optimism, I sent my kids upstairs, telling them to get their pajamas on, brush their teeth, and put themselves to bed. By 8:30 we moved into the living room.

1. Tom’s Presentation: What Do Photos Do For Us?

I talked a little about my own bafflement about why I post to Facebook. What is the purpose in my mind? But then I shifted the question to what a photo means to me in a purely private sense.

Yann caught this shift and clarified that… we were no longer talking about social media, then? I took his correction and tried to narrow my point of what a photograph means to each one of us privately.

Still, as our discussion got underway, it all got mixed up anyway!

Setenay remarked that she posts photos online mostly for her family in Turkey to view. So Facebook functions for her a kind of convenient photo-album. She feels that photographs are always nostalgic and sentimental. They are also celebrations, though. But perhaps, she suggested, there is another use of them: as a way to construct meaning in our lives.

Marie-José mentioned that, for her, photographs play a very different role: they simply provide a method by which to capture the unique way she sees the world. For example, she said, she may see two lines intersecting on a light post, or on a store window, and she will snap a quick photograph of that. This happens all day long, little instances when she wants to hold a moment in time. At home, Marie-José confessed, she spends a lot of time organizing and sifting through her digital photos, categorizing them by theme and visual impact.

Kristen said that because photos capture time they give her pleasure — she does not dwell on the loss, or even feel nostalgic, but instead the memories lift her.

I mentioned how the more I have learned about the neural plasticity of our brains, the more suspicious I have become of recorded images. According to neuroscience,  photographs and home videos, once viewed, will dominate our memories whether we want them to or not. Other, more elusive memories will not merely get crowded out or overpowered; they will, in effect, get erased.

For that reason I am glad that I have never watched Renée’s and my wedding video — I want the experience of that day to stay rich and strange in my mind and not get reduced to a single, somewhat arbitrary perspective.

2. Yann’s Question about “Arabic” vs. “Western” Understandings of Photographs

Yann brought up that he has read that in the “Arab” (Muslim?) world art is not understood as a separate realm of beauty and aspiration than crafts. Art is work like any other kind of work. There is shoddy work. There is excellent work. That applies to making a chair. It applies equally to painting a portrait.

In the West we are accustomed to this idea of an artist inhabiting a separate realm — that of the “fine” arts (or so we call it). “Where do members of the group stand on this question?” he asked. “Do you have the “Arabic” view or the “Western” one? Is art more elevated?

A number of people responded that they think of art as just another craft.

I mentioned that for years I have been feeling that the deluge, the vast quantity of art that reaches us now (through the entertainment delivery systems like Netflix and Xfinity, Youtube, etc.) has changed our understanding of what artists do.

Artists are no longer as rarefied as they used to be. Especially young people seem to celebrate all forms of creativity on equal grounds these days. In fact, some time over the past 10 years we have lost the high-brow, low-brow distinction entirely! (For example, a ridiculous but effective clay-mation story on Youtube may be valued as highly as much as a 16th century poem by John Donne. It’s a “whatever works for you” kind of thing.)

Manon spoke up to say that there does seem to be something about making art that is distinct from crafts.

She ran a preschool for many years, and she described for the group how, on occasion, one of the children’s drawing would turn out to be obviously spectacular. Just the right arrangement of colors and textures. A strange thematic unity. A shocking perspective on, say, what a brother looks like, or a dad (in my own family, I always wondered why I looked so dippy in my children’s early drawings — what devastating truth were they seeing to make them draw me like that? But that’s another story).

But these occasional triumphs of form by preschool-aged children are not the same as art, Manon, argued. Art, to her, is qualitatively different when an artist aspires to a great drawing, than when a child stumbles upon it.

Picking up on this point, I asked Yann if it wasn’t true that some singular mind, some unique artistic sensibility, has to be in charge, even in building the non-representational patterns in the mosques of the Middle East. Surely someone instructed the craftsmen (were there, are there, craftswomen?) to use only aqua-blue and yellow tiles in this one section; to broaden the arc here, and hollow out the bricks just so.

So there was a singular mind, then, with a clear vision, behind the “art,” wasn’t there? Even if it is true that it wasn’t and isn’t valued any more highly than a craft. There is a distinction, even if it isn’t recognized.

I said I agreed with Manon that there strikes me as something missing if we abandon the value the West has (at least since the 17th century) placed on the aspirations of the artist to communicate, not merely to decorate.

Walden followed on this by suggesting that art is nothing more than a form of communication. That is its function. This led to a discussion about Aristotle’s Politics, and his point that outside of society, outside of the polis, “man is either a god or a beast.” That a human life only flourishes in a social setting. I described how this insight was a turning point for me when I was studying philosophy. I had entered graduate school looking for my own individual sense of right and wrong; I left looking to define the values of the world as I wanted it to look. (I was influenced by Richard Rorty in this outlook as well.)

The rest of the meeting we spent, with great pleasure, sharing the photos that people brought.

Kristin brought some gorgeous black and white images by the French photographer, Henri Cartier-Bresson, famous for his ability to capture the “decisive moment.” Here are two images Kristen shared: 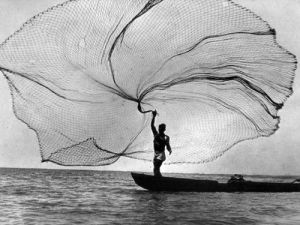 Coley showed a photo that she took at the end of summer, two summers ago, on Tomales Bay. She said that she especially like the doubling, even the tripling of the point-of-view in this image, starting with Adeline (our daughter, standing under the tree), then, closer to us, the unseen photographer (Coley), and finally the viewer, whomever you may be. (Is there a fourth? Deep question.)

Unfortunately I don’t have any other submissions to show. Please send them in if you want to.

Oh, and you are worrying about whether the kids put themselves to sleep all by themselves? They did! No idea how late. The truth is that I completely forgot to check in on them, but when I went upstairs at 11 pm they were all asleep in the dark, tucked in, happily dreaming.

I should have taken a picture.