[In our October meeting, Florence mentioned to the group that in thinking about the prehistoric era she had been led to the writings of Théodore Monod, a French explorer, anthropologist, poet and writer. I encouraged her to share on the blog some of what she had read… if she would be so kind as to translate it into English (most of his works are not translated). Florence sent the following by email.] 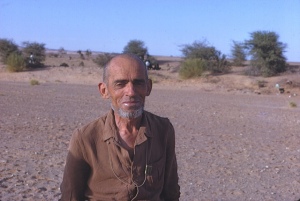 He wrote many books about his various explorations, always deeply interested in humankind, the definition of “progress”, and also obviously the ” modern” human relationship to nature.

He was an incredible nature lover and a great poet, also!
He conducted many observations, explorations, and trips in the Sahara desert ( and others) and found many paleolitic objects, paintings, etc.

His books are fantastic and a true pleasure to read over long period of time… I just wish he was translated in English! (other than the one book Desert).

Basic summary of some of his ideas:

1. The original relationship of man among other animals (magical and symbolic links with nature, and he argues that it is appropriate to still have some today);
2. Then the “divorce” with nature, leading to the “progress” of human power, rationalisation and domination etc. (He also recognizes the great steps in science);
3. And finally, our current “reconciliation need ” (this was my favorite part of his writings), namely, our need for a new way of thinking. Very similar to us!

SOME KEY SENTENCES I have extracted from his books:
To lead to the area of ” big stable joys”, humankind must be freed … by (among other elements) its sympathy, and establish a system of new moral values based on a general respect of life under all its shapes( animals, plants, living bodies).
He is inspired by Albert Schweitzer ‘s philosophy (in 1915) and also, briefly, Albert Einstein’s writings and thoughts…
Modern life, he held, must not be based on material comfort and individualism.

From homo “sapiens” to today homo “economicus”, all moral codes have been defined by religions and ideological systems.

Today humankind is facing new problems and issues generated  by the religion of progress, material profit, and “technolatrie”.

We must find again the “unity of things and living beings” with key words like: solidarity, communion, sympathy (empathy for others/ for all living beings)….
We must create a moral view as strong and demanding as our modern power. Otherwise we are in big danger of disappearing …
We must reconcile being and having.

He also makes reference to Victor Hugo very often: celui qui ceuille une fleur derange une etoile…
He wishes to live his life as his friend Teilhard (who had two passions: the love of science and the abiding question of god):  more eupraxie than orthodoxie: more rectitude of conduct than adherence to dogma.

Not sure this is clear Tom …and not perhaps very loyal to Théodore Monod (I have made a very approximate translation: Théodore Monod is much more complex and beautiful and simple in his writings).